A Plague of Sorrow and Grief 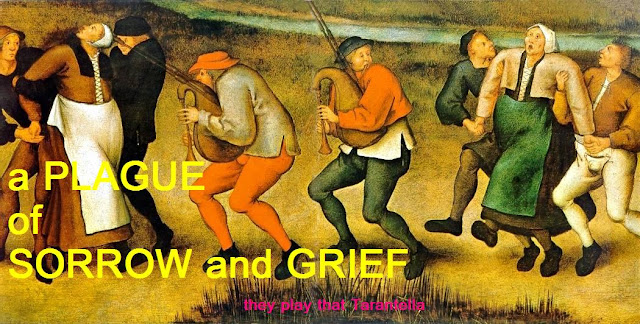 "It occurred only in the summer months. As with dancing mania, people would suddenly begin to dance, sometimes affected by a perceived bite or sting and were joined by others, who believed the venom from their own old bites was reactivated by the heat or the music."

Yesterday, Bradley Manning was convicted of Espionage because he reported to the world that our military and our politicians were engaging in crimes against humanity. As political refugee Alexander Solzhenitsyn told Americans of Stalin's vast network of prison camps, Edward Snowdon revealed that the American Government is spying on our calls and emails. Ed Snowdon today sits in a Moscow airport seeking refuge from political persecution: in Russia.

But the nation is fixated upon other issues.  Why?

In 1518 a "dancing mania" broke out in Strasbourg.  A woman named Frau Troffea was struck first, dancing uncontrollably in the street, and soon the mania spread with hundreds of the residents of the town joining in. Observers of those held in this trance were even attacked if they didn't join in, while many participants, exhausted, panicked and tired, danced till they died.  The church, the city government and the medical profession did not know how to respond, but the record survives of their concern and confusion.  Then, in the hilarious logic of the medical profession of medieval Europe, a cure was found: If music was played to accompany the dancers, they'll dance their way out of it!  The City Council accepted this therapy and so cleared two guildhalls and a grain market, even setting up a stage and paying musicians to play for the entranced. The solution to mass hysteria was to encourage it.

The cause of this mania, it has been suggested, was an atmosphere of danger and fear present in the city because of poverty, failed harvests: what we call today, economic insecurity.  In times of extreme stress and crisis, when the causes of our pain and anxiety seem to be outside of human control, there is a sublimation of dread and panic onto the body, and the mind -- the performance of a ritual, no matter how improbable its efficacy, becomes a command that all must obey...

...even if it makes everything worse.

And here we have to go back in time, to the frustration of democracy and the rise of business and empire in the 1960s.  Fifty years ago many Baby Boomers set out to take control of the government itself and make it equitable and just. And the Government fought back. After the civil rights victories of the middle 60s, the idea that activist politics would transform government in America and take control of its institutions was abandoned in the wake of COINTELPRO and other government attacks upon those activists. President Nixon set in motion the globalization and financializaiton of the economy and a consequent decline in the welfare of the majority of Americans for the last forty years.  The void of lost prosperity was filled, by subsequent Presidents and their marketing campaigns, with the endless waving of little American flags and an increasing fixation by Americans on sports -- leaving middle America in 2013 a gibbering unemployed fool in a football jersey cursing Arabs, buying Cheetos, and ammunition at Walmart.

A Plague of Sorrow and Grief:

Those still interested in politics since the 1970s. accepting as they did that the government and society couldn't be changed for the better, thought perhaps that the new role of government could be to spread the existing benefits enjoyed by the white middle class to minorities.  And thus began the descent into the mad dancing world of identity politics.

Remember: the from the mid-70s globalized trade and production caused America to de-industrialize.  Production and jobs were transferred and lost abroad.  Always among the first to lose their jobs in an economic downturn were African Americans; without meaningful work, black life in America was "recriminalized", the new Jim Crow.  In the 80s Americas prison system expanded dramatically to house a larger and larger population of the unemployed.  All indicators of prosperity were dismissed in favor of a mania for indices like the Dow Jones Industrial Average... ...Today the stock market is at an all time high, while unemployment is endemic, and 1 and 6 Americans are feeding themselves with food stamps, and 4 of 5 live in poverty during their lifetimes.

They play that Tarantella...

Undaunted by the real: on the parade of policy trinkets, among them Affirmative Action.  Instead of Civil Rights for African Americans, we have a policy that says: if you survive eighteen years of degrading poverty and crime in America's collapsing cities, then we'll let a tiny percentage of you into the universities. Championed by university professors who wish away the first two brutal decades of life and meet those famished in body and mind with a performance of postmodern concern and a featherweight aria of enlightenment. "Come dance with me."

Here in the midst of these crises. the law is bent to token inclusions: like gay marriage, marriage itself the extension of a Medieval privilege, and our listeners can look forward to something called "Trayvon's Law" a bill that will not address unemployment, destruction of the natural environment, rotten schools, and government corruption and government criminality, but will outlaw some set of accidents, circumstances of a celebrated an instance of crime.

Now every major newspaper and website is running dozens of articles on racism and gay rights and the dance is on.  The causes of globalization and global warming are not to be considered, only the symptoms of our hysterical anxiety are to be treated.  And if you question this dance, the trance of Americans suspended and whirling in terror and hallucinatory elation, if you don't join in, you may yourself be attacked.

Presently in the United States, there is a fear and dread in all of us.  In history, this anxiety is usually the private reservation of the poor, but because of global warming, a globalized economy, a wrecked environment and our vanishing civil liberties, this dread can no longer be escaped by the rich and middle classes, those people formerly invincible in their ignorance of the problems of the world.

Like the Dancing Plague of Strasbourg, in their moment of confrontation with the what they believe to be the inescapable decline of our World, strange distractions and manias have captured the imagination of Americans. Our ever-dancing issues, gay marriage, abortion and the pageant of mourning over the death of a teenager, who died not of race, but of social and economic collapse, these eclipse reality: and the prescription of our medieval doctors? The journalists and intellectuals in America say today, "Dance yourself to Death."
Posted by Charles R Schultz at 7:55 PM