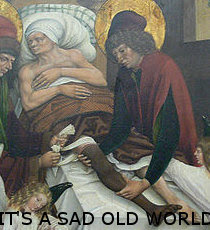 Contained within the architecture of modern transportation networks are the plans of mass dislocation.  So while the driver, or commercial air passenger, feel they are given freedom, they are actually accepting the ease and facility of their dislocation.  Their mobility robs them of a fixed position, a locality.  As the global economy, a grandiose fantasy, collapsed, there was a spirit, promoted by business media, that we should or would have "six jobs in our lifetime."  When the crash happened perversely hopeful NPR radio essays told us of "permanent 'temps' who travel the nation" -- temporary job to temporary job.  A punishment from antiquity: for those men who wished of traveling freely over the face of the earth, to know the world, they have traded the ability to know their home.


If Friedrich Kittler is correct, and Marshall McLuhan's idea of media as extension of self is a dangerously unexamined question (i.e. what is self?), that technology in fact imprints "self" (down to the very use of the word "imprint" as this word is not written but burnt onto silicon), that we are not in control as we imagine, that the technology defines us, then we can have our sanity, but we live in a terrifying world filled with endless vectors, real and not yet identified threats.  If McLuhan's argument is correct, then we are all insane, but the illusions and spectacles that are generated by our society can relieve us, however temporarily, of fear.  Said another way, technology is not a tool we pick up and use at our will, a separate entity that we take up and put down, but the lens through which we perceive what is real. The pair of glasses is not just an object, it is your vision.

There is a false dilemma as well between a humanist, "we tell the machines what to do" and a supposedly anti-humanist view "the machines tell us what to do."  The truth is that we tell the machines what to tell us to do.  What if we change our infrastructure to limit the dislocation of population?  And what of globalization and its parallel fuel transportation system?  Put not in a reactive, but a radical way, if we build infrastructure and machines that by its nature, imparted by humans, privilege the local, what of that?

In a sense, the 20th century was about connecting the whole globe, and this great technological feat permeated the entire culture of the west.  The New Age mantra, "We're all connected, man..."  was really hippies connecting with the spirit of President Eisenhower and the interstate highway system.  And while it is true that we are all connected, the appropriate response, to transportation infrastructure and cloying hippie bullshit, is "Oh no! We're all connected!"
Posted by Charles R Schultz at 11:14 PM No comments: